“Dipole was first drilled in 2015, where 9 of 9 ValOre diamond drill holes intersected multiple zones of near surface uranium mineralization in rocks analogous to those found in the Lac 50 Trend deposits,” stated ValOre’s VP of Exploration, Colin Smith. “2022 RC drilling at Dipole confirms that U3O8 mineralization remains open at depth and along strike in both directions coincident to a 3.4-km-long, coincident, VLF-EM conductor and uranium-in-soils anomaly.”

* All zone interval measurements are metres (“m”) down-hole, and true widths are yet to be determined

Nine of nine core holes drilled in 2015 intercepted multiple stacked zones of U3O8 mineralization at vertical depths ranging from 15 m to 110 m and along 150 m of strike length (Figure 1). Assay highlights include:

Exploration drilling at Dipole in 2022 will follow-up the high-grade U3O8 core intercepts from 2015, which outlined a 25 m to 48 m wide zone of multiple, steeply dipping mineralized intervals hosted in a sequence of structurally weak pyroclastic horizons. The 150 m of U3O8-bearing strike length drilled in 2015 will be further tested along 1.5 km of prospective trend, characterized by a strong VLF-EM conductor and coincident uranium-in-soil anomaly (Figure 2). It was the pairing of VLF-EM and soil data that led ValOre geologists to the Dipole drilling discovery in 2015.

The 1,865 m of proposed RC drilling will be conducted from approximately 7 drill sites, with an average of 2 holes per pad. Given the steep orientation (~70 to 75°) of Dipole’s uraniferous structures, the first hole from each pad will be drilled at a -45° dip to ensure a maximum thickness of target stratigraphy is tested, and that drilling intercepts are as close to true widths as possible. Subsequent drill hole(s) from the same pad will be drilled at steeper dips, in 10 to 15° increments, with a maximum of 3 holes at each pad.

Drill hole spacing proximal to the area of 2015 drilling will be 50 m, which is the average collar spacing at Lac 50. Subsequent step-outs along the regional strike will progressively increase to a collar spacing 100 m and 150 m (all divisible by 50 m), with a final regional step-out of 800 m along strike to the northeast, testing a strong geochemical anomaly. Favorable results on 100, 150, and 800 m step-outs may be followed up with infill drilling, to establish an overall spacing of 50 m between collars.

Preliminary RC drilling results indicate a strong continuity of the target uraniferous structure in all holes, with multiple zones of radioactivity encountered in 7 of 7 holes (7th hole, RC22-DP-007, is ongoing). This suggests a doubling of the drill-confirmed Dipole zone from 150 to 300 m, with expansion potential wide open in both directions of strike, and at depth, along a 3.4-km-long geochemically anomalous conductor. Furthermore, while the current soil sampling coverage spans 3.4 km of strike, strong uranium-in-soil anomalies are truncated on both ends of the grid, with the target conductor extending for approximately 9 km. Extensional EL soil sampling is warranted to assess the uranium potential of this regional target.

Upon receipt of continued favorable results, an expansion to the 2022 RC and/or core drilling program at Dipole will reviewed and considered.

Dipole is located approximately 27 km southwest of the Lac 50 Trend deposits (“Lac 50” - 43.3 Mlbs U3O8 in 2,831,000 tonnes grading 0.69% U3O8) in a northeast-trending belt of Archean metavolcanic rocks analogous to those that host Lac 50. In 2011, a ValOre prospecting crew uncovered highly mineralized (up to 2.24% U3O8 and 116 g/t Ag) angular boulders on the shore of a small lake proximal to and immediately down-ice from the southwest portion of a ~3.4-km-long VLF-EM conductor anomaly. Subsequent enzyme leach (“EL”) soil sampling in 2014 defined a coincident uranium anomaly, which was drill tested by 9 core holes (958 m) in 2015. All 9 holes intercepted multiple stacked zones of U3O8 mineralization at vertical depths ranging from 15 m to 110 m and along 150 m of strike length. At Dipole, U3O8 mineralization remains open at depth and along strike in both directions along a 3.4-km-long, coincident, VLF-EM conductor and uranium-in-soils anomaly.

CLICK HERE for news release dated October 19, 2015 and see Figure 1 below for a summary of Dipole.

Additional EL soil sampling in 2016 defined a new 600-m-long uranium anomaly that overlies a parallel EM conductor 1.5 km to 2.1 km northeast of the Dipole drilling. This extended the prospective trend to over 3.4 km, with both the VLF-EM and soil anomalies remaining open along strike in both directions.

Mineralization at Dipole is associated with sheared and brecciated hematite-carbonate-chlorite altered graphitic tuff units, mineralized with pitchblende and sulphides, within a sequence of mafic to intermediate tuffs and massive to pillowed basalt. Much like Lac 50, molybdenum and silver occur with, and adjacent to, the uranium mineralization at Dipole. 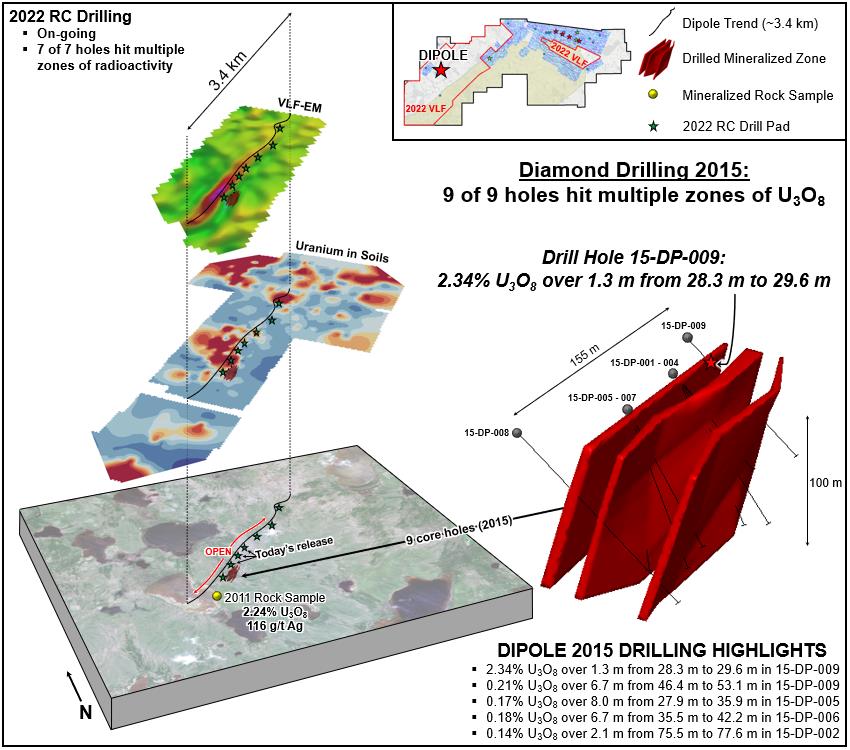 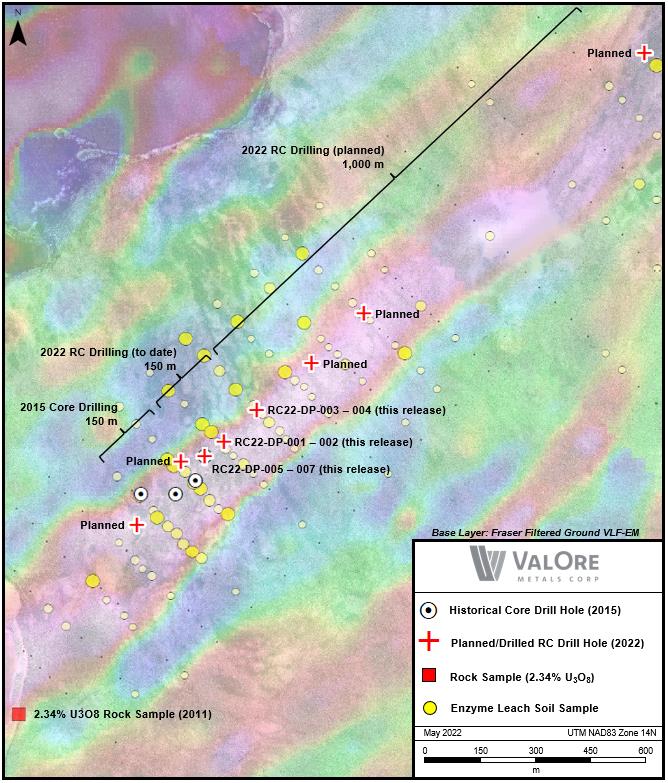 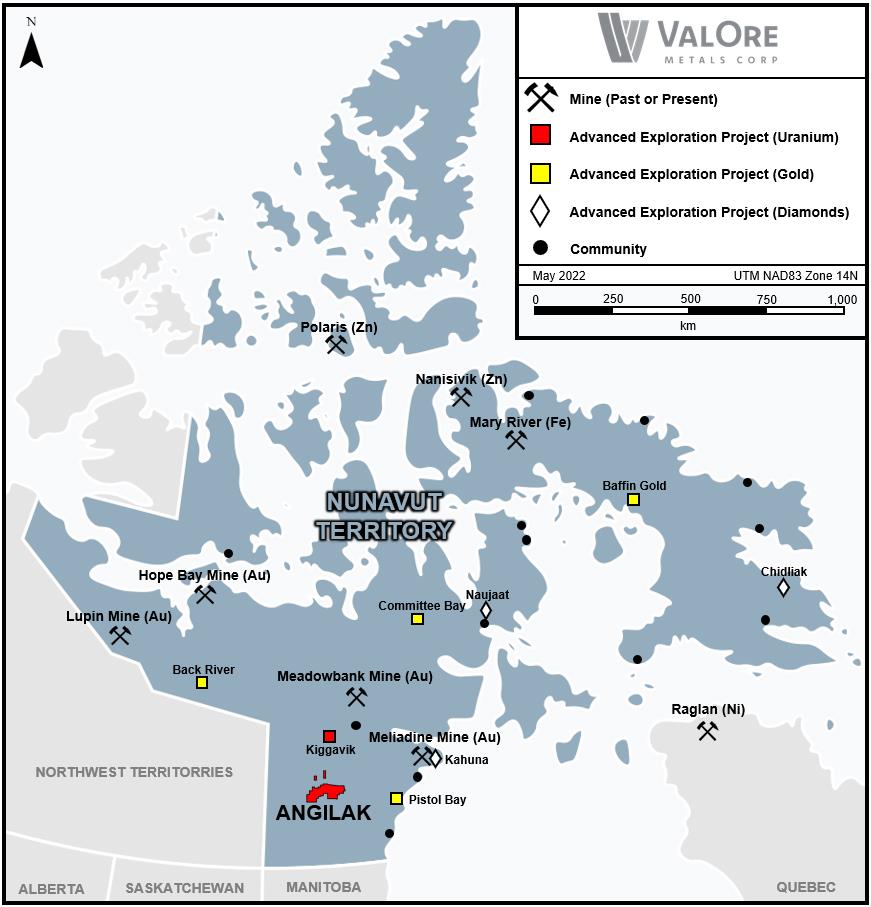 The 59,483-hectare Angilak Property is situated in the mining- and exploration-friendly Nunavut Territory, Canada, and has district-scale potential for uranium, precious and base metals. Since acquisition, ValOre has invested over CAD$55 million on resource delineation and exploration drilling (89,572 metres in 589 drill holes), metallurgy, geophysics, geochemistry, and logistics across the large land package. This work supported the development of the significant Lac 50 Trend NI 43-101 inferred resource estimate (“Lac 50”).

ValOre’s May 6, 2021 video summarizing the highlights of Angilak.

The technical information in this news release has been prepared in accordance with Canadian regulatory requirements set out in NI 43-101 and reviewed and approved by Colin Smith, P.Geo., ValOre’s QP and Vice President of Exploration.

Information related to the independent Pedra Branca mineral resource estimate has been approved by Fábio Valério, P.Geo., and Porfirio Cabaleiro, P.Eng., of GE21.

ValOre Metals Corp. (TSX‐V: VO) is a Canadian company with a portfolio of high‐quality exploration projects. ValOre’s team aims to deploy capital and knowledge on projects which benefit from substantial prior investment by previous owners, existence of high-value mineralization on a large scale, and the possibility of adding tangible value through exploration, process improvement, and innovation.

In May 2019, ValOre announced the acquisition of the Pedra Branca Platinum Group Elements (PGE) property, in Brazil, to bolster its existing Angilak uranium, Genesis/Hatchet uranium and Baffin gold projects in Canada.

ValOre’s team has forged strong relationships with sophisticated resource sector investors and partner Nunavut Tunngavik Inc. (NTI) on both the Angilak and Baffin Gold Properties. ValOre was the first company to sign a comprehensive agreement to explore for uranium on Inuit Owned Lands in Nunavut Territory and is committed to building shareholder value while adhering to high levels of environmental and safety standards and proactive local community engagement.

On behalf of the Board of Directors,

For further information about ValOre Metals Corp., or this news release, please visit our website at www.valoremetals.com or contact Investor Relations at 604.653.9464, or by email at [email protected].